The United Nations Association in Canada – Vancouver Branch is looking for a qualified volunteer who can support our website for a period of 6 months, with the possibility of extension. You will be supporting an organization which is passionate about global issues and public education.

Please e-mail Jocelyn Pittel at jqpfac052@yahoo.com with a copy of your resume and a cover letter in which you explain why you want to take on this opportunity and how you would be a good fit. The position will be advertised until it is filled.

All UN Association in Canada – Vancouver Branch events and activities are made possible through donations from the public, membership fees and fundraising events. The Vancouver Branch is run strictly by volunteers.

The 2020 John Gibbard Award virtual presentation allowed us to get creative in telling the story of this year’s very deserving winner. The Unitarian Church of Vancouver partnered with UNAC-V to deliver a wonderful tribute on Sunday, October 25th (to honour United Nations Day – October 24th) to the achievements of the Douglas College Nursing Students’ Homeless Outreach Project. Their work in the Downtown Eastside (DTES) has been timely given the opioid crisis and the pandemic striking hard at this part of our community.

The Vancouver Branch of the UN Association of Canada (UNAC) is proud to note that the Norwegian Nobel Committee has awarded the 2020 Nobel Peace Prize to the United Nations World Food Programme (WFP).

In a small coronavirus-restricted award ceremony on Friday the chairwoman of the committee said that the award was given to WFP because it wanted to focus the world’s attention on “the millions of people who suffer from or face the threat of hunger.”  She added that hunger is used as a “weapon of war and conflict.”

In its citation the Nobel Committee praised the UN agency for its contribution to creating peace in conflict-affected areas such as Syria and Yemen. In a tweet of thanks, WFP responded “This is a powerful reminder to the world that peace and #ZeroHunger go hand-in-hand.”

The UN World Food Programme joins former UN Secretary-General the late Kofi Annan who was awarded the Nobel Peace Prize in 2001 for revitalizing the UN and UN Peacekeeping Forces who received the award in 1988.

UNAC Vancouver is proud to acknowledge its board member Rosio Godomar who served in the UN WFP from 1991 to 2011. 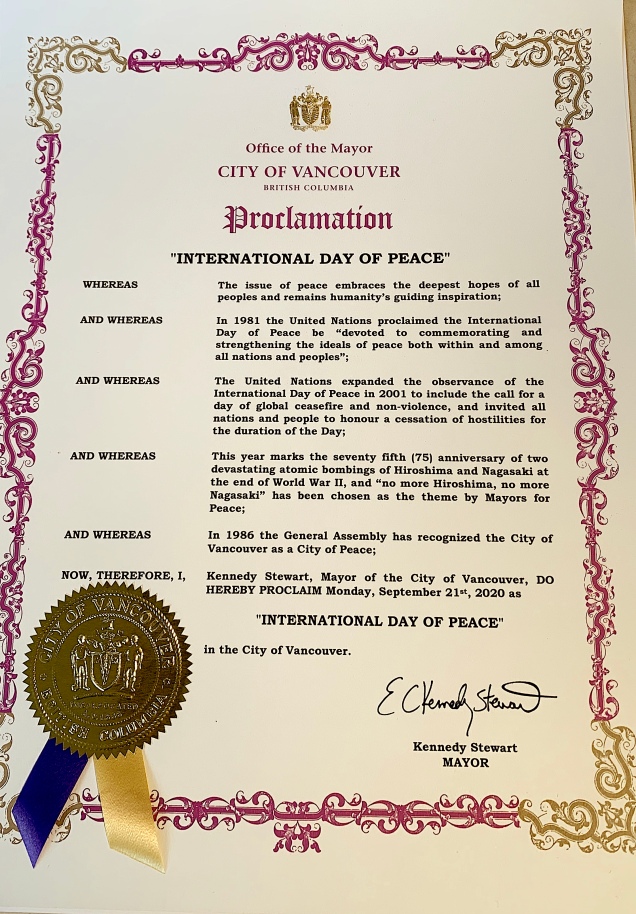 The theme for the International Day of Peace, September 21st, 2020 is “No More Hirosima, No More Nagasaki,” recognizing this year as the 75th anniversary of the atomic bombing of both Japanese cities.

The City of Vancouver today issued the above proclamation recognizing the importance of this day. 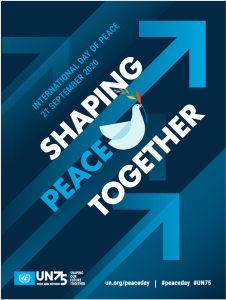 Monday, September 21st marks the annual United Nations International Day of Peace, a day dedicated to the core foundation and mandate of the UN – maintaining peace and security.  The annual General Assembly begins, also marks another milestone, the seventy-fifth anniversary of the adoption of the UN Charter by the fifty governments who made up the UN’s founding member states. Tweeting in June this year the UN Secretary-General Antonio Guterres, noted “[the UN Charter’s] principles ring just as true today. It is a much-needed guide to solving our shared problems. Let us now realize the vision of peace, human rights, justice and development – of dignity for all.”

It is the role of the UN Association in Canada (UNAC), as well as UNAs around the world, to empower and educate their citizens, and especially youth through informing them about the UN’s role, and advocate for the goals and ideals of that organization.

The first mention of the United Nations was in 1942 when the wartime Allied leaders conceived of an international organization that would ‘…save future generations from the scourge of war.’ The UN Charter, which came into force in October 1945 calls for the organization to maintain international peace and security; promote social progress and better standards of life; strengthen international law; and promote human rights. In the intervening years, the UN Secretariat has been joined by UN specialized Agencies such as UNICEF, the World Food Programme (WFP), the World Health Organization (WHO), the UN Development Programme (UNDP) and others, dealing with Human Rights or refugees for example. These agencies have focussed attention on some of the world’s most intractable problems.

The broad range of tasks envisioned in the UN Charter 75 years ago is as valid today as it was then. The goals, values and ideals which the Charter sets for the UN remain the capstone for a world mired in a pandemic, torn by discrimination, endangered by climate change and scarred by poverty, inequality and war. Every generation of young people in all 193 UN member states demands that the goals and ideals of the UN must be promoted.

In honour of the International Day of Peace each year the UN General Assembly calls upon the global community to participate in 24 hours of non-violence and cease-fire. On that day, staff in UN offices around the world from New York to Bangkok to Nairobi will celebrate the day with the communities they serve. Military and civilian staff from UN Peace Operations in diverse locations such as Mali, the Democratic Republic of the Congo and Cyprus will use the day to advocate for the peaceful resolution of conflict.

At the UN Headquarters in New York the UN General Assembly will this year hold a virtual event. Because of the pandemic, world leaders will participate in the meeting through recorded video statements while their representatives will be in New York.  The theme will be ‘The Future We Want; the UN We Need: Reaffirming our Collective Commitment to Multilateralism.’ It will focus on collective problem-solving and efforts to ensure that effective global governance is a reality when it is needed.

The United Nation’s 17 Sustainable Development Goals (SDGs) will also be taking center stage during the 75th anniversary commemorations. The main purpose of the SDGs is to be a blueprint to achieve a better and more sustainable future for all. For a more detailed view of the UN SDGs, please see the related article on the UNAC Vancouver website as well as the UN website.

As the UN marks its 75th anniversary, the UN Secretary-General acknowledge that many political, economic and social problems “are ratcheting up.” The organization itself faces a number of political and economic challenges yet it remains, after 75 years, a key part of the world’s response to those problems.

If you would like to get involved, please join us in sharing your views through this global survey and check out what UNAC Vancouver and other associations around Canada are planning.