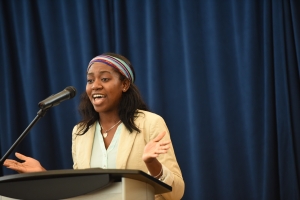 Kaidie Williams is an International Relations and Economics student at UBC, hailing from the small island state of Dominica. Her interests include public speaking, connecting with people and reading economics-related magazines. Kaidie is deeply involved in many aspects of campus. She is President of the Model United Nations Student Association (MUNSA), Vice Chair of the UBC Vancouver Senate, Senior Advisor for Residence Life, and Student Coordinator of the Caribbean Returning Nationals Foundation. As part of UBC’s International Service Learning program, she recently completed an internship where she worked on implementing UN Sustainable Development Goals (SDGs) with a development organization. Verna Yam (in bold) interviewed Kaidie Williams on behalf of UNAC-V.

How did you learn about MUN and start getting involved?

During high school, I went to an event promoting UBC, where they encouraged us to join MUN. I thought that it sounded pretty cool.

But when I entered university and started doing MUN, I was so confused. There were people who had done conferences before and who knew everything. I felt like this was way out of my league. Honestly, there were a few moments where I thought, “This isn’t for me.”

That was all until I went to my first conference in Seattle, where I was blown away. With so many people, great ideas and potential all in one place, you can solve an incredible number of issues in just three days at one conference. That’s what drew me to MUN. I cried on the bus back home because it was such a surreal experience for me: realizing that even if you are from a tiny island, you still have a way of making an impact. Your ideas can be presented and understood, and then intertwined into a bigger picture. That’s when I felt, “Yeah, this is my thing.”

What’s the most valuable thing you’ve learned from MUN?

That every country has a voice, no matter how small or big you are. I’m really interested in small island states, so I appreciate the idea of coalitions where countries come together to present a voice that is just as valuable as the voice of large powers. It’s recognized that you don’t have to be powerful to have influence. You just have to have a voice, and that voice will be heard.

What other knowledge, lessons or skills did you learn from MUN?

An important lesson that I’ve learnt is that we can all effect change. At every MUN conference I go to, I see a way to innovate. I see a way to recreate the UN. When you work together with people and have all these ideas are present, we’re essentially a generation of individuals who will shape what it means to be the UN and will redefine diplomacy.

As for skills, I learned about public speaking. Honestly, if you told me a few years ago that I would be running for UBC Vancouver Senate, I would’ve said that you were lying. MUN gives you the courage to speak up. It’s taught me to never consider myself as insignificant, because you have a voice. You have the potential to command a room and effect change. This helped propel me to run for Senate.

Finally, I learned how to connect with individuals who have different views. Each country comes with its own views. But at the end of the day, you have to create one concrete item. You need the ability to take all those pieces, all those perspectives to create that one thing. How do you compromise and how do you negotiate? How do you please everyone without sacrificing yourself or the needs of others?

Aside from MUN, what role does the UN play in your life?

What’s something cool that you learned about the UN?

The coolest thing, as simple as it sounds, is the range of committees. We have so many committees and focus groups. Even with all those different silos, we can still come together and create things like the SDGs.

What’s one thing about the UN that you think fellow students or youth should know?

I just want them to know that the UN has a lot more potential than you think it does. Someone once told me, “The UN is a myth.” However, I can think of so many successful agreements and treaties. While there is room for improvement, the UN has been a pillar for peace, hope, and security; even when peace is fragile and crises abound. Think of all the things that the UN has done. Think of all the peacekeeping missions that we have, and the effects of those missions. I think we need to put a lot more faith into the UN instead of trying to belittle it. Why don’t we come together to make it better? Why don’t we suggest reforms?

Why do you think that it’s important for youth to learn about the UN?

It’s also important to learn about the UN so you can start thinking of ways to improve it. MUN is a way for you to start thinking about reform. It’s not just a bunch of kids debating. It’s us trying to look at real world issues from different perspectives and asking, “How can we redefine diplomacy in 2016?” Because goodness knows we need it, now more than ever before.